One of Astoria’s favorite sons is Whitey Ford, NY Yankee great, and one of the premier pitchers in the history of the sport.

Last Saturday, we had a street renaming in honor of Whitey Ford, at 43rd street and 34th avenue. He lived in that neighborhood, and played there as a child, honing the skills that would serve him and the Yankees so well in the future. 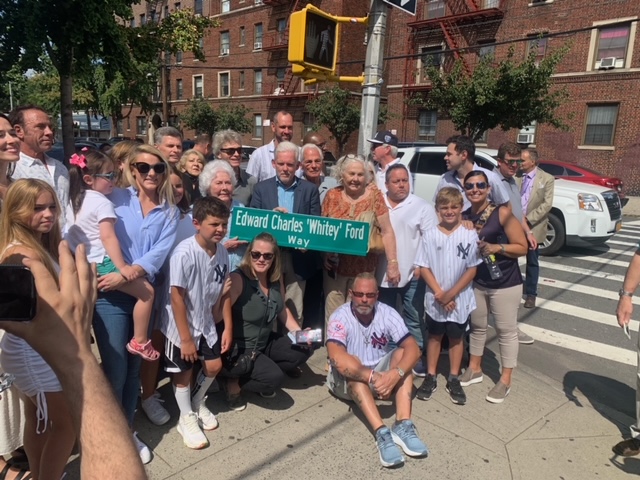 Whitey Ford, Chairman of the Board was signed by the Yankees in 1947. He spent his entire career of 16 years pitching in the Majors. He won six world series and is a 10-time All-Star. In 1974 he was inducted into the Baseball Hall of Fame Whitey moved to Astoria at age five. He played stickball on the back streets and baseball on sandlots with the 34th Avenue Boys, in the Kiwanis League. Before joining the Yankees, Whitey spent much of his time with his grandma on 43rd Street. When he was signed for the Yankees in 1947, a block party was organized by the Yankees for him on 43rd street.

The Old Astoria Neighborhood Association and the Friends of Whitey Ford Field would like to thank Councilman Jimmy Van Bramer for sponsoring the street renaming. We would also like to thank Borough President Donovan Richards, State Senator Michael Gianaris, and Former Councilman Costa Constantinides for participating in the ceremony! 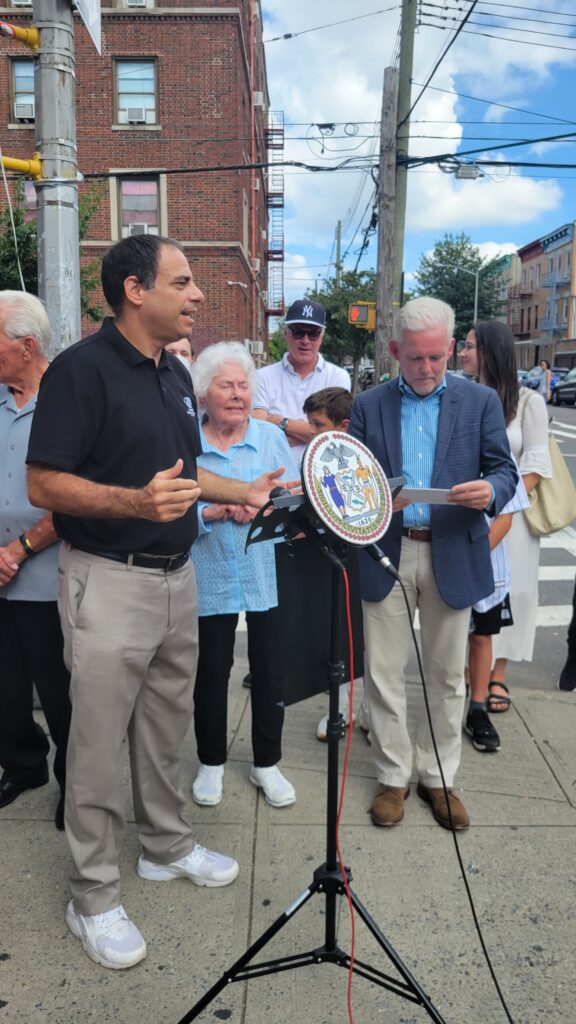 We had great participation from the public, and especially the Ford and Clancy Families. It was a most memorable event.

Also, providing remarks were Blair Clancy, Granddaughter of Whitey Ford and Co-Chair of the Friends of Whitey Ford Field, along with Neil Herdan, (who was essential in making this event a reality), and Richard Khuzami, President of the Old Astoria Neighborhood Association. Whitey Ford Field is a wonderful ballfield on the East River with great views of Hellgate and RFK Bridges. It is currently undergoing a multi-million-dollar renovation funded by Parks, The Borough President, and the City Council. We would like to especially shout out former Councilman Constantinides for promoting the renovation. 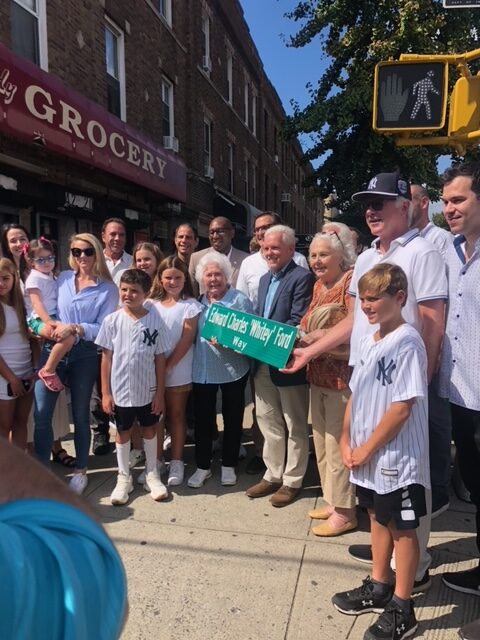 “Whitey Ford took great pride in growing up here and it’s so nice to see a place he called home for so many years show him so much love in return. This street has a lot of history and now his legacy will officially live on right where it all started”

“The Old Astoria Neighborhood Association has been proud to have helped in the naming of this street to honor Whitey Ford, native son of Astoria and an essential member of some of the greatest teams in the history of American sport.

As a child, I had his picture on my bedroom wall, and his exploits were what dreams were made of for my generation. I never would have believed as a child that I would have a part in an event like this.

And may Astoria keep strong as a community, one that nurtures the best in in all of us, and continue to produce the kind of residents that Whitey Ford exemplifies”

“I am honored and humbled to see all my research payoff in the co-naming of this street corner.  I owe a special gratitude to Margaret Foran-Bartels, Whitey Ford’s sister in law. Without Margaret it would have been impossible to identify the exact location where the street sign needed to be placed. Margaret fact checked all my research on Whitey Ford’s early life in Astoria over the past few years.  Margaret and her husband Bobby Bartels are Astoria natives.