UPDATE: The new Astoria ferry route had 28,115 riders from August 29th through September 5th, DNAInfo is reporting, The new route surpassed ridership on both the South Brooklyn and Rockaways lines. The NYC Economic Development Corporation initially predicted that the Astoria route would service 1,800 riders per weekday and 3,300 on weekends, according to DNAInfo.

On August 29 at 6.30 am, the new NYC Ferry Service from Hallets Cove to Manhattan kicked off in style as the inaugural ferry boat left the landing with many members of our community on board. Those on the first ferry disembarked at the East 34th Street store where Mayor Bill de Blasio was waiting to shake hands with the Astoria passengers. In his remarks, the Mayor said that

“The amazing success of NYC Ferry is a tribute to the can-do attitude of New York City and underlines the tremendous need to connect underserved communities to jobs, schools, health care and parks. We will continue to improve public transportation options and quality of life for all New Yorkers.”

Mayor de Blasio introduced a 94-year old resident of the Astoria Houses who expressed her pleasure at the new service. Those in the Astoria Houses will now be able to hop on a boat and arrive at East 34th Street in half the time they previously had to spending walking to and riding the N train. Claudia Coger, President of Astoria Houses Residents Association, said that “on behalf of the Astoria Houses Residents Association, we couldn’t be more excited to welcome a new era of transportation to Hallets Cove today. The start of NYC Ferry service right across the street from Astoria Houses means that our residents will now have access to a fast, affordable way to commute to other parts of the city, especially to Midtown and Downtown Manhattan, and free transfers to other NYC Ferry routes. This is a win for Astoria residents, families and job seekers alike.”

Richard Khuzami, OANA president, told ABC 7 Eyewitness News that “through this ferry we’re going to get more services, more infrastructure”. The members of the Old Astoria Neighborhood Association view the Astoria Ferry essential in the mission to bring the quality of life in Old Astoria to the highest possible level achievable. Expanded transportation options will increase investment in infrastructure, private enterprise, cultural institutions, services, education, and all other components that create healthy communities.

District 22 Council Member Costa Constantinides said that ‘after years of advocacy and planning with the neighborhood, we’re happy to open this new route. The NYC Ferry system expands public transit options for Western Astoria residents and will help revitalize Hallets Peninsula. Thank you to Mayor de Blasio for his bold vision in helping to ensure this innovative and sustainable form of transportation is available for Astoria.”

‘We are anticipating great success in Astoria and look forward to more ferries and more landings servicing NYC in the near future,” said Florence Koulouris, District Manager of Queens Community Board 1.

Local photographer Scott Young kindly got up before dawn to shoot an amazing time lapse video of the departure of the first boat from the Hallets Cove landing.

The new ferry service, which runs from Astoria to Roosevelt Island to Long Island City to East 34th Street to Pier 11 in Manhattan, will add another 1,800 riders a day to the 12,000 daily riders already carried by NYC Ferry. NYC Ferry is hiring for various jobs, including captains and deckhands. Jobseekers can apply directly through Hornblower’s website, www.ferry.nyc. NYC Ferry estimate that they will eventually provide 200 jobs, all of which will pay the City’s Living Wage or higher and will include a benefits package.

OANA has long been an advocate of the opening of a ferry route in Astoria and we anticipate that the greater connectivity of our neighborhood will be a benefit to all. We would like to thank Council Members Costa Constantinides and Jimmy Van Bramer; Congresswoman Carolyn Maloney; Senator Michael Gianaris; OANA board members John Hatfield (Executive Director of Socrates Sculpture Park), Brett Harris, and Aki Todic: Astoria Houses Tenants Association President and Vice President Claudia Coger and Vanessa Jones-Hall; Mark Christie and Rob Basch of Hunters Point Park Conservancy; Louis Kleinman of Waterfront Alliance; Florence Koulouris, District Manager of Queens Community Board 1; CB 1 Board Chair Norma Nieves-Blas; Ed Babor of Congresswoman Maloney’s staff; Elizabeth Lusskin, President of the LIC Partnership; Justine Johnson and James Wong from the New York City Economic Development Corporation; Katie Ellman, Ilana Teitel and Ted Gruber of Green Shores NYC; and Jane Swanson, Assistant Director, Government and Community Relations at Cornell Tech, for joining the inaugural boat ride from Astoria. And a special shout out to Cameron Clark, Franny Civitano and Elana Ehrenberg from NYC Ferry for facilitating the event and making sure the inaugural launch ran smoothly from start to finish.

Timetables for the Astoria route, along with a map of all 2017 routes, can be viewed here. The fare for a ride is $2.75 and you can get transfers between ferries. Tickets can be purchased from the machines at the ferry landing or on a mobile app that will also display real-time arrival and departure information. NYC Ferry shuttle buses will provide shuttle buses from the East 34th Street landing to midtown, timed to coincide with boat arrivals. But with a great view of the East River, free Wi-Fi and a snack bar, you may not even want to get off the boat. We’ll see you on board! 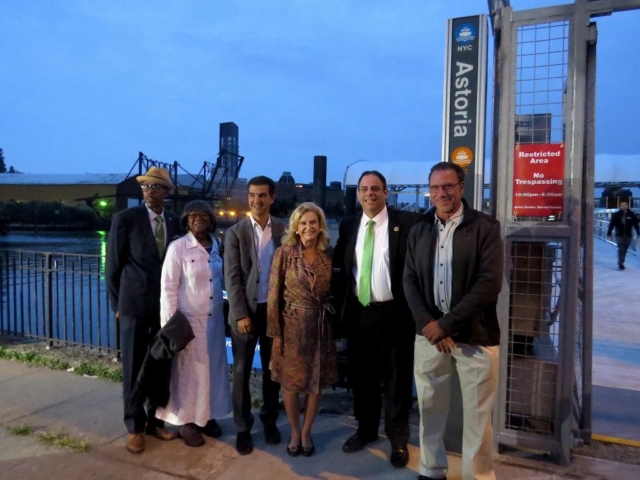 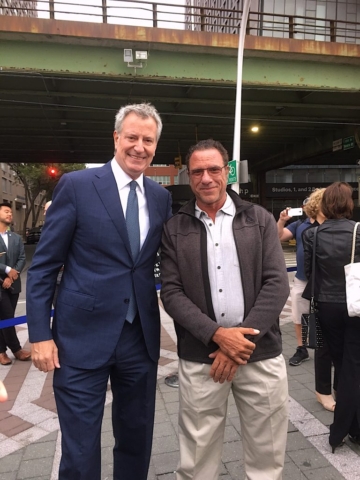 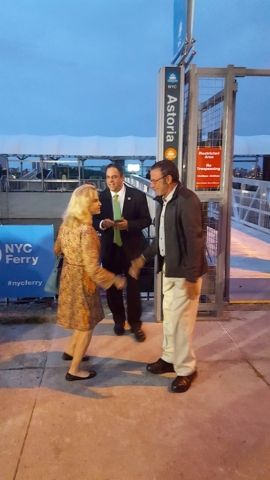 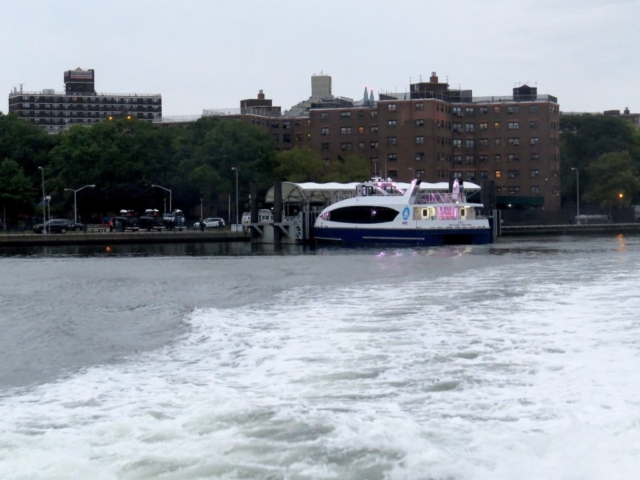 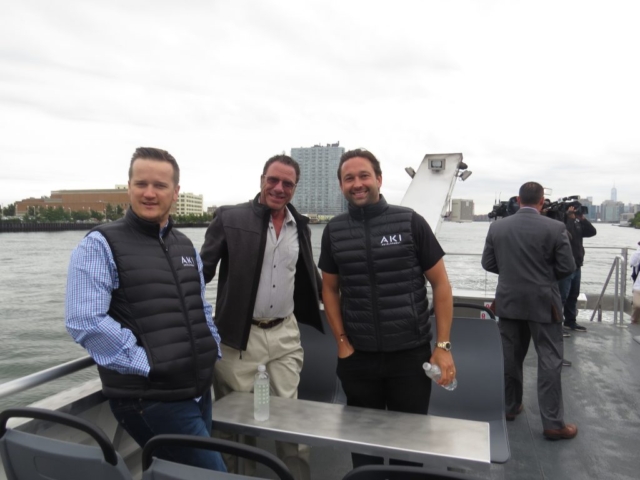 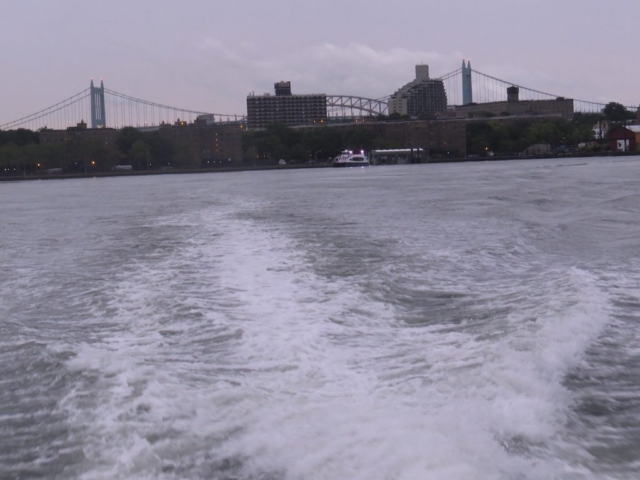 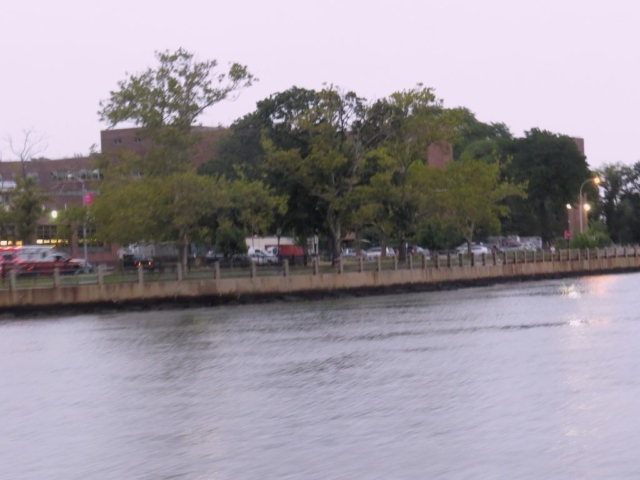 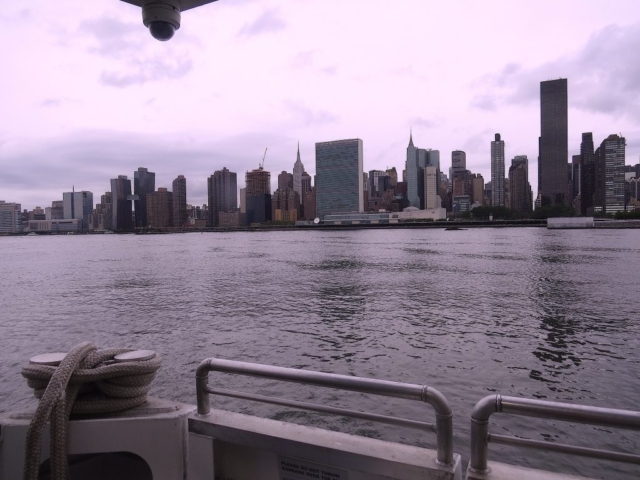 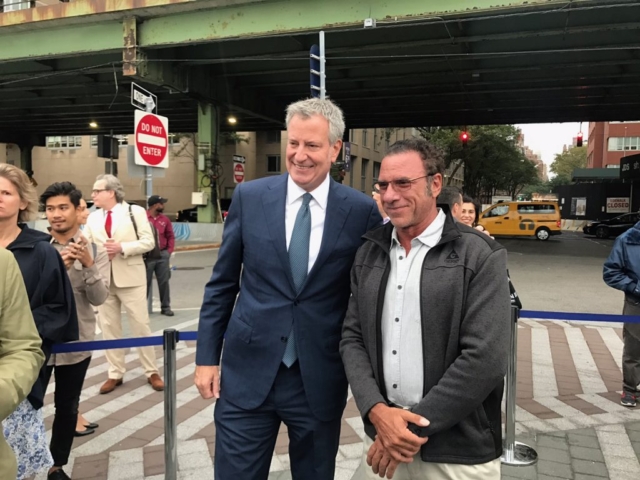