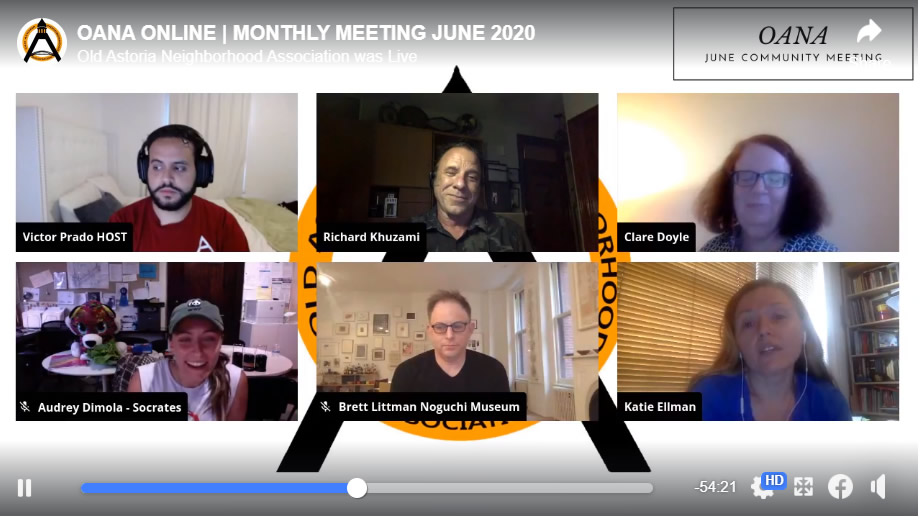 On June 30, OANA had its second online meeting streamed live on Facebook and YouTube. Guest speakers shared important information and updates about their institutions as we all adapt to phase two of reopening the city.

Queens Park Commissioner Michael Dockett informed about amenities within the parks that are available, such as playgrounds and athletic fields. More athletic spaces and other amenities will become available when phase three is reached. Dockett expects cooperation from the public by wearing masks and maintaining social distancing. The park staff provides masks as needed. Local park manager Shirley Echevarria informed that park staffing was reduced due to budget cuts. Echevarria asks the public to collaborate on health precautions by sanitizing playgrounds, given that staff has not been able to do it.

President of Green Shores NYC Katie Ellman presented the all-volunteer organization’s vision and goals. It advocates for equal access to the waterfront of the East River by creating social and environmental spaces outside and inside the river that the public can enjoy. She stated that the organization has removed 10,000 gallons of shoreline trash. On that note, Ellman invited the public to participate on the virtual discussion panel on “The Story of Plastic.” It will be held on the Green Shores NYC Facebook page on July 7 at 7 p.m.

A moment of gratitude and acknowledgment for Clare Doyle was held in between presentations. Doyle has stepped down from her roles as Vice President of Green Shores NYC and blogger for OANA as she is headed to Ireland.

Audrey Dimola from Socrates Sculptural Park provided information on events at the park, including a monument presentation by artist Jeffrey Gibson called “Because Once You Enter My House, It Becomes Our House,” starting July 10. A virtual tour of the monument and three live streams performances by Indigenous artists around it will be available at their social media. Dimola advertised to the socially distanced community initiative “Let’s Talk” in July– an extensive conversational event. The park’s composting program is not available at the moment.

Brett Littman from the Noguchi Museum was proud to share that they are the only museum to keep all employees. On another note, they pushed their events for a year and embraced online ones. Museums are not allowed to open until phase four– until then, Littman said they are working on meeting all health guidelines, and have had staff go through Black Lives Matter training.

On local theaters updates, Toni Foy from the La Guardia Performing Arts Center said their theater is closed, but they have been creative to stay active during the pandemic. The organization helps artists create and develop projects; Foy said some have experimented with bringing their projects online.

Nina Fiori, president of the Astoria Film Festival, informed that it has been postponed to October, but they are also preparing for a possibility of it being online, which depends on the pandemic status in the city by then.

Michelle Orosz from Headwall Theatre Company highlighted their presence online with a series of monologs.

Following, Dev Bondarin from Astoria Performing Arts Center shared about early season events, including an online theatre festival with musicals written during the pandemic, about the pandemic; it is available on the organization’s YouTube channel.

Watch the full meeting below.

Carol Rangel is a rising second-year Journalism student at Emerson College, Boston. Along with her major, she is minoring in Political Science and Marketing Communication. Carol has worked alongside the community in Boston to cover her past beat on the Massachusett's Work and Family Mobility Act bill. Natural from Brazil and pursuing her undergraduate career in the United States, Carol values all opportunities to be involved in her college-- as a freshman, she worked as Assistant Webmaster for the Emerson Channel, participated in the TV productions of late-night show Closing Time and news broadcast J Channel, and worked as a staff photographer for her campus' newspaper The Berkeley Beacon.