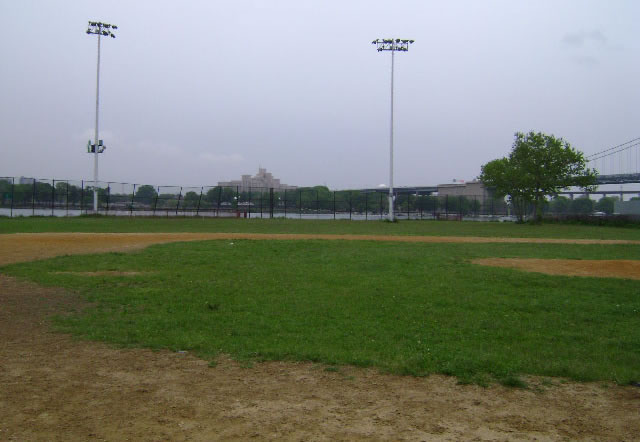 There is a gem on Hallets Peninsula on the waterfront in Astoria. Next to the Durst Organization’s new Hallets Point development is a Great American Diamond, with a view of the Hell Gate: Whitey Ford Field. Named after Astoria Houses Native and Yankees star Whitey Ford, this baseball field sits on a site with a long history, starting with Fort Stevens in the War of 1812, to the lighthouse that stood until 1982.

Whitey Ford Field has been enjoying quite a renaissance, along with the rest of Old Astoria. Today, the Astoria Social League has some 300 members. This league started in 2014 with about 30 people. And now it serves 16 teams, up from 4 teams. It continues to grow more every season, wiith a continued waiting list. You can find more information about them here – http://www.astoria-social.com/softball/. In addition, the Twitter baseball league has about 70 members and is run by Evan Roberts from WFAN.

But the field is in dire need of renovation
Minimum improvements needed at Whitey Ford Field are the following:
– Drainage repairs to the baseball field to ensure no more flooding
– Removal of the metal grates in the outfield
– Repair of the baseball field to level the grounds and ensuring there are no more uneven areas throughout the playing field

Councilman Costas Constantinides has made it a priority, along with Community Board 1, to secure public funding for the renovation. The Councilman made special mention of this commitment in his 2017 State of the District Address. And the Old Astoria Neighborhood Association has decided to act as a Fiscal Sponsor of the Field, and is working to secure private funding for both capital improvements and maintenance of the field. Perhaps some day we can enjoy new scoreboards, concessions, lockers, comfort stations and dugouts.

Special thanks go out to those individuals who have made all this happen by their persistence in making everyone aware of Whitey Ford Field: Sam Schachter, Dan Sullivan, Neil Herdan, and Warren Sheinwald. They are also in the process of starting a “Friends of Whitey Ford Field” volunteer group.