Summer on the Astoria Waterfront 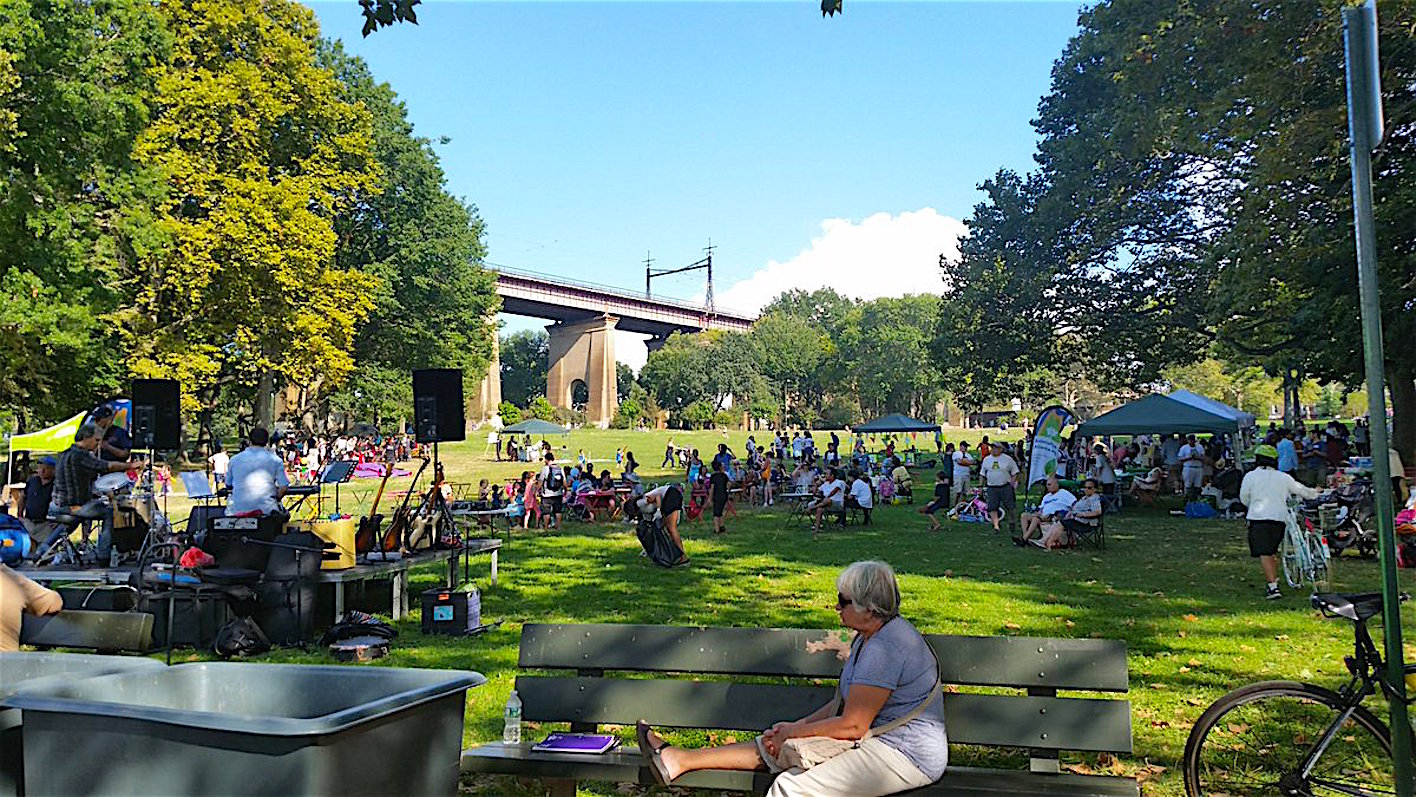 The June meeting of the Old Astoria Neighborhood Association (OANA) featured our NYC Parks District Manager, our District 22 City Council Member, and representatives from the cultural and recreational institutions on the Astoria waterfront to give us a preview of all the great events and programs to come this summer.

Audrey Dimola, Director of Public Programs at Socrates Sculpture Park, gave the meeting attendees some background on the history of the Park, which, as she said, is the legacy of artist Mark di Suvero (who still has a studio close to Socrates) when he “had a vision to create a space for the community”. 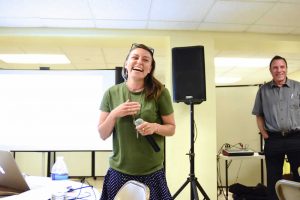 They have two exhibitions yearly.  The current exhibit is Cronus Cosmos, the theme being space and time, which will be up until Labor Day.  The park is open 365 days a year from 9 am until sunset, and all programs and events are free.  Socrates has a Saturday afternoon sculpture artmaking class in the summer.  Their outdoor cinema series on Wednesdays will begin July 3rd showcasing March of the Penguins. They have a partnership with hip-hop legend Ralph McDaniels to continue Hip-Hop in the Park, which drew a large attendance last year. The Met Opera will have a free recital in the park on Monday June 17th.  Yoga and Taiichi occur Saturdays and Sunday.  Sunset Meditation, a new program, occurs on Tuesday evenings.  More information on Socrates Sculpture Park’s events here. 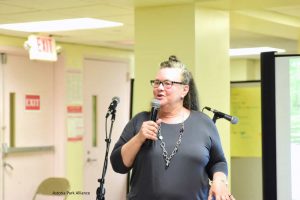 Astoria Park Alliance Board member Dori Cocoros discussed what APA does. It is a non-profit organization that has been growing over the last 12years.  Their mission, according to Dori, is building community through the parks. They support the Parks department.  They run events that include clean-ups in the park and leaf fest events in the fall.  APA sponsors a movie in the park in the early summer; this June it was Bohemian Rhapsody last Friday evening.  Sunday June 16th will be their 2nd annual Classic Car Show cosponsored by OANA.  There will be yoga on the terrace of the swimming pool, starting June 29th throughout the summer. The next cleanup event will be July 13th.  More on APA’s summer events here. 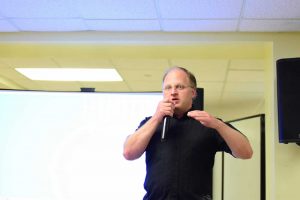 David Matten, senior administrator of the Long Island City Community Boathouse,  explained the programs run by LICCB, an all-volunteer organization.  Plaxall gives them their space at Annable Basin.  They run walk up paddling events at Halletts Cove and Annable Basin that begin on Memorial Day and end on Labor Day. There are seven dates set for Halletts Cove and six dates for Annable Basin. David mentioned that LICCB is always looking for volunteers, especially to help with the walk-up paddling events: “We are only limited by our volunteer bandwidth,” David said. A full list of LICCB programs is here. 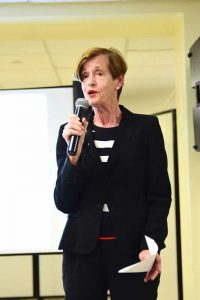 Marie Tornialli, Executive Director of Central Astoria LDC, told the OANA meeting that her organization began 35 years ago with one small Independence Day celebration with a few hundred people.  They currently provide 24 local events.  The majority are held in Astoria Park, with a few events held in Rainey Park.  They have summer movies and concerts and introduced their drive-in movies last year.   Their signature event will be on June 27th, the Independence Day celebration with a concert and fireworks, which now draws in the many thousands. Central Astoria LDC’s events calendar is here.

Jennifer Lorch, Assistant Director of the Noguchi Museum, discussed the history of the museum and how it fit into the biography of Isamu Noguchi. As Jennifer said, it was the first museum in the United States to focus on the work of a living artist. There is a permanent collection of Noguchi’s work but the museum also curates temporary exhibitions. The museum also presents concerts in the garden (part of the Bang on a Can music series), Free First Fridays (with extended summer hours), and Community Days featuring special events and tours. More on the Noguchi’s public programs here. 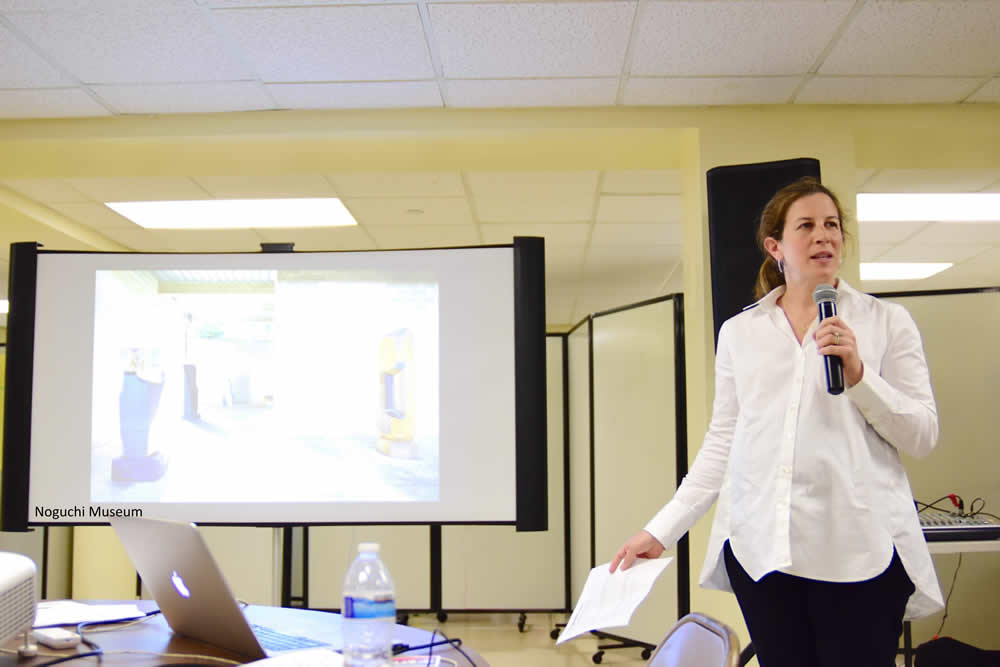 Friends of Whitey Ford Field Co-Chairs Blair Clancy and Neil Herdan gave some background on Whitey Ford and their recent Family Day. An inaugural fundraising event will take place later in the summer.  They will be having one more clean up before the season is over.  All of their events can be found on their Facebook page. 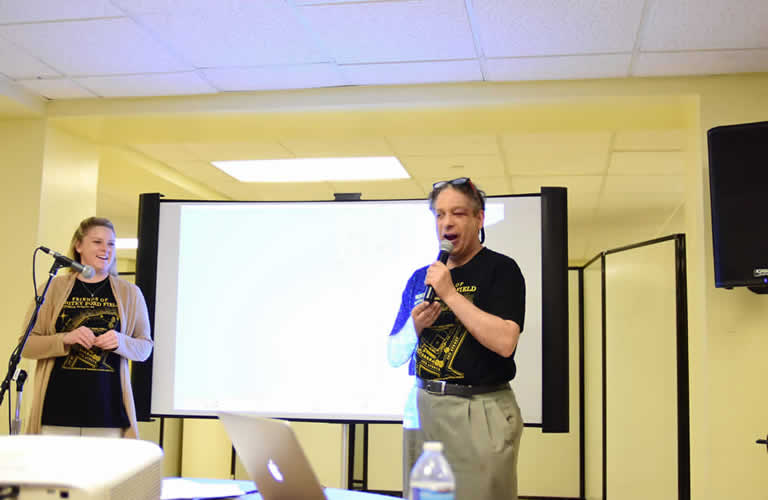 Vanessa Hall-Jones of Two Coves Community Garden presented the history of the garden, which began as a dumpsite illegally used by local businesses. Residents of the Astoria Houses and the neighborhood rallied to eliminate the dumping into the garden.  They started with 12 members and currently have over 200 members.  They also have 107 plots and are growing. 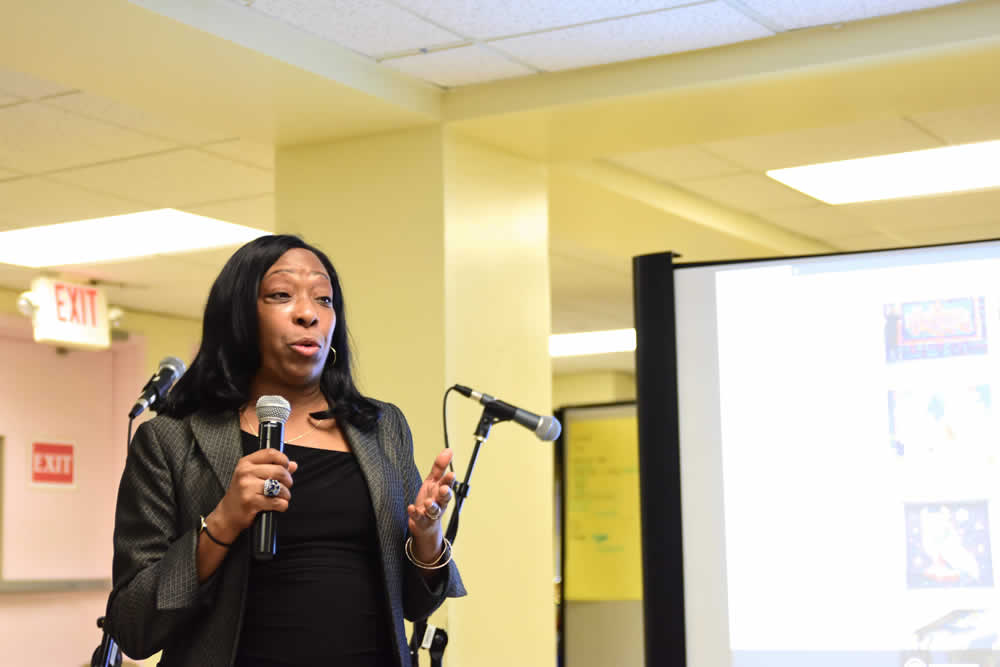 Vanessa said that the best thing about Two Coves is the great diversity of the gardeners. They were able to complete their irrigation system and have electricity established.  They will have a tour on July 20th giving the history of the garden.  They are open Saturday and Sunday from 8 am to 6 pm and run gardening programs for children in the summer. More details on events on their Facebook page.

Welling Court Mural Project founder Garrison Buxton discussed the founding of the project which had its origins when local resident Jonathan Ellis connected with an art collective that Garrison was running in Brooklyn.  It started with 44 murals.  The Project, now in its 10th year, is currently up to 150 murals.  The murals represent work by local artists but also artist from Russia, China and other locations. 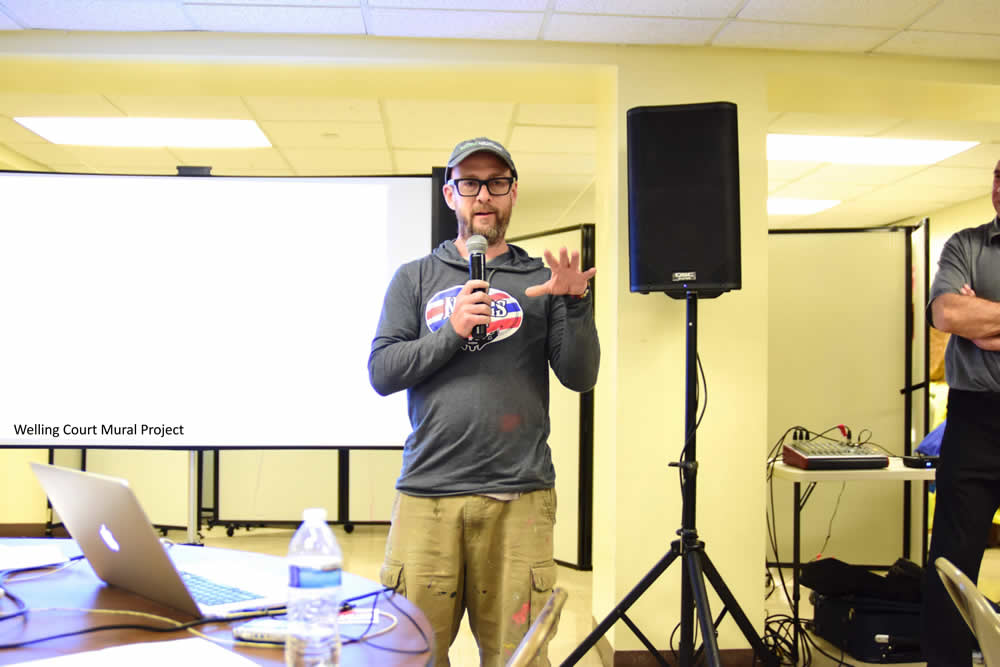 Also on hand: Shirley Echevarria, NYC Parks District Manager, who presented the status of current and future renovation of Astoria parks and playgrounds. To see at what stage these projects are in, you can use NYC Park’s Capital Project Tracker. 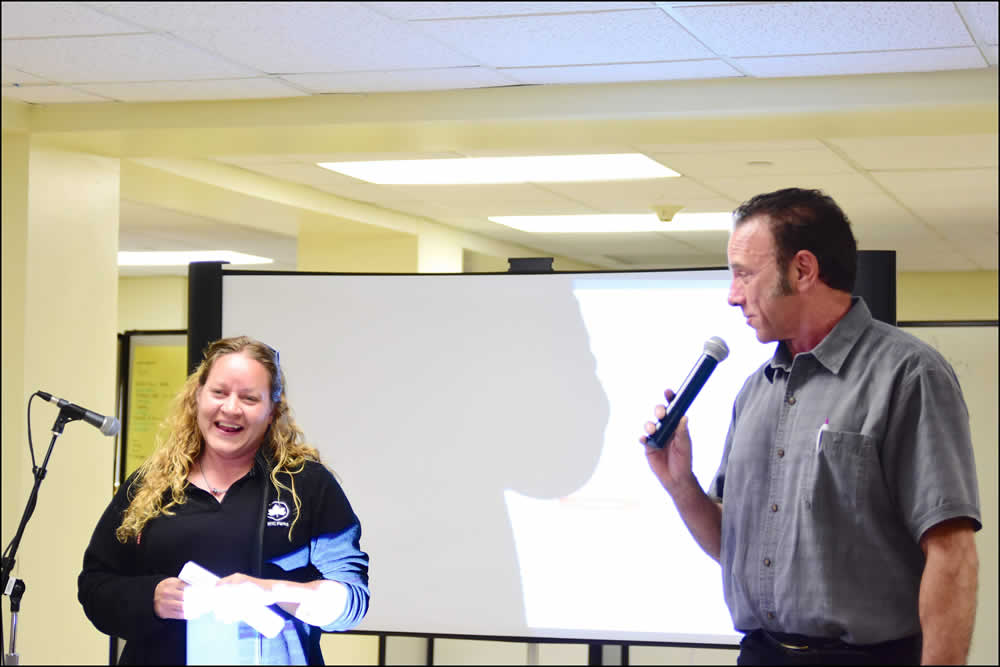 And we were pleased to have District 22 Council Member Costa Constantinides. He discussed ongoing budget negotiations and his current bill to create a dedicated Office of Sustainability and Climate Change. He also expressed his support for OANA’s proposal for Waterfront Arts District that would link and promote all the great cultural institutions we have on the Old Astoria waterfront. 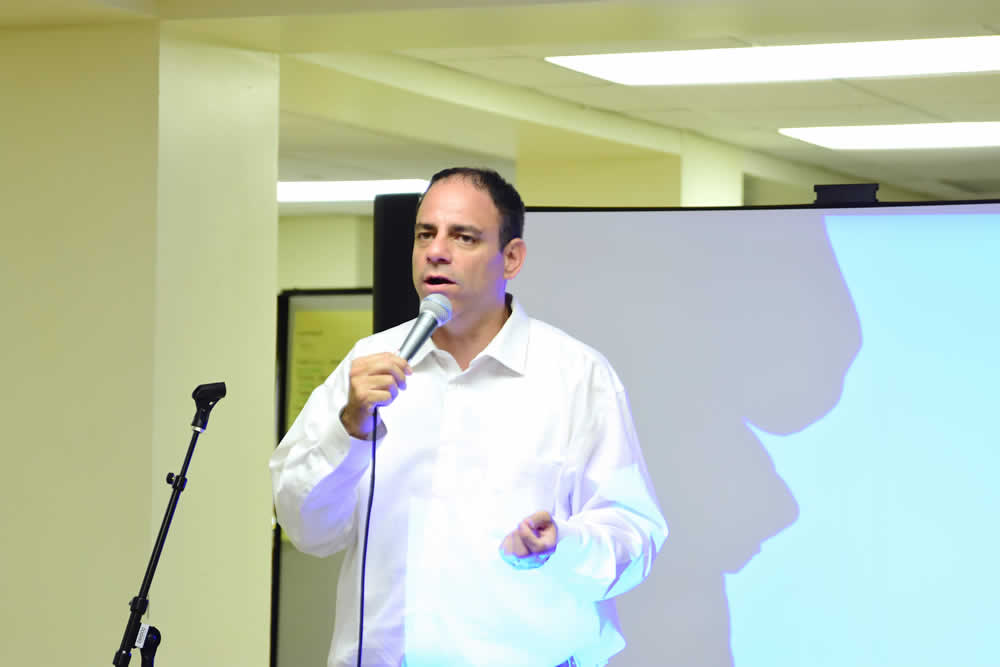 We are truly fortunate to have such a rich cultural and recreational opportunities. And with the Hallets Cove ferry landing, we can welcome the rest of the city! OANA President Richard Khuzami gave the meeting an update on OANA’s position that extension of the ferry route to the Upper East Side would create a positive economic effect for both areas. However, the NYC Economic Development Corporation has advised that they will not begin to study this proposal until 2021. We are disappointed at this timeline, and ask that the process be expedited. If you agree, you can sign our petition here!

For a calendar of events, please see https://oana-ny.org/events/